I’m here to pay a bit of tribute to Ruth Walker. No. Not me. The other one. One of two reasons for the E. in my writing name. The international influence that put the “tentative” in my early writing career. My secret nemisis.

Because every time I hit up Google for Ruth Walker (go on…admit it…most of us did it when we started out) there she would be: Ruth Walker. Seasoned journalist and editor. Decades of reporting in the U.S. and abroad (including a stint in Canada), and editing for The Christian Science Monitor.

Sadly, Ruth passed away this past September. The Society of Professional Consultants, of which she was the 2017 President, offers up this as part of her obituary:

[Ruth] served as the Monitor’s deputy editor, editorial-page editor, and online news editor before leaving to pursue a freelance career as a writer, editor, and consultant in 2006. Ruth was currently the author of Verbal Energy, a popular weekly column on language and etymology in the Monitor.

Had they asked Ruth, I suspect she might have suggested that “was currently” could be replaced with “was most recently” but that just proves she and I shared some interests.

Adding ink to your porridge 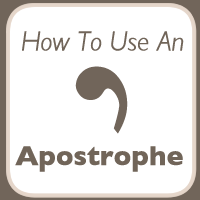 Here’s another reason to like Ruth. From a January 2010 Verbal Energy column, she takes on the misuse of the apostrophe, referencing The Oatmeal and the delightful spelling and grammar posters you’ll find there. There was no link to the Oatmeal from Ruth Walker’s article in the Monitor, likely due to the decidedly non-PG13 state of some of the work there, but I have no such qualms. Nonetheless, she offers:

Ah, thou apostrophe! Thou useful but so oft misused mark! (The foregoing is an example of apostrophe in another sense: “address to an absent person or personified thing.”)

The Oatmeal opus, in the form of a flow chart, walks the would-be punctuator through some basic if/then steps. “Is it plural? DON’T use an apostrophe.”

The misuse of apostophe also makes me crazy. But I know it’s one of many common errors that editors stumble across. So I really liked the quickie grammar references at the end of her column, “How to be possessive about apostrophes:”

In the Oatmeal spirit of “just enough” grammar, here are some hints to use as editorial first aid until a professional can make it to the scene:

1. If you aren’t absolutely sure about who and whom, go with who. Use of whom in the wrong place looks much worse than failure to use whom in the right place.

2. Forgo and forego are both real words; they mean “give up” and “precede,” respectively. But “forego” (as distinct from foregoing) is almost always wrong. “I will forego you out of the room”? Yeah. Right.

3. Both affect and effect can be either a noun or a verb. But you could probably live your whole life without using effect as a verb or affect as a noun. Many people do – and quite happily, too.

I am only sorry that I didn’t actually read her work until now. I rather like her wit and direct style.

Power in a name

At the beginning of this post, I said that Ruth Walker was one of two reasons for the E. in my professional writer’s name. (possessive, not plural.)

Before I discovered my life as a writer in 1996, I spent a couple of decades in Human Resources. Yes. That department. I had a lot of bosses over the years. Many of them women. Some of them so insecure or poorly trained/supported that they made my working life challenging at best, hellish at worst.

But then In the late-80s (plural, not possessive) the hospital hired a new HR manager. A woman genuinely interested in work-life balance long before it was an HR buzzword. A revelation, in fact.

My boss demonstrated the best kind of management qualities for the women and men in her various departments: mentoring and modelling in a positive and instructive manner. I learned how to ask with confidence. She nudged me forward, until I discovered I could actually talk in front of groups without fainting. And I learned that kindness and empathy could open doors in even the most difficult situations.

She was the most self-assured manager I’d ever worked for, so I looked for all the ways she pulled it off. I believed (and still do) that one of her secrets was to use her middle initial in her professional capacity. It was, to me, something of a statement, a Here I am world, more than Mary Smith. I’m Mary D. Smith. How many times in my clerical years had I seen men use their middle initials on the letters I’d typed for them? Lots. And the women? Never. Not until this boss.

Taking on the power

As soon as I had the opportunity to establish myself professionally, I considered the E. I, too, would make that statement. Finding another well-known and respected Ruth Walker in the world of writing sealed the deal.

So there you have it. The desire to be someone different from a noted writer and editor, coupled with my nervousness when I first started writing, drove me to my middle initial. Do I regret it? Not one bit. On the one hand, I feel like I’m honouring a woman who stood out as a wonderful model to the other women in her orbit. And on the other hand, I wanted to stand out in the art of words among other Ruth Walkers as me, the one with the E. 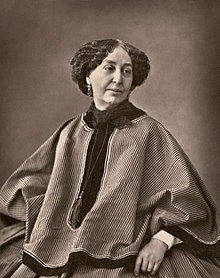 Many writers choose not to publish under their own names, using pseudonyms instead. Their reasons for writing with a pen name are as diverse as their narrative voices. Some, like 19th century French novelist and memoirist Amantine Lucile Aurore Dupin wrote under the name George Sand. Canadian author and filmmaker Leslie McFarlane wrote 20 of the Hardy Boys adventure series as Franklin W. Dixon. When he moved on, the Dixon name continued under a series of other Hardy Boys writers.

At our most recent retreat, participants were given a series of clues at every meal, all leading to the final clue and answer. It seemed fitting as our Turning Leaves guest author, Vicki Delany, writes mysteries and thrillers. The answer to each clue was a pen name for a famous author. From Mark Twain (Samuel Clemens) to Robert Galbraith (J.K. Rowling), participants were challenged to use their sleuthing skills to discover the answers.

Years ago, I was a committed aquafit attendee. Underwater lunges, leg lifts by the jets, jogging through chlorinated pools—it all turned my crank. I went twice a week with my best friend, Linda. We had a blast, challenging each other to push harder, harder. We churned up big waves with our enthusiasm and built up some wonderful stamina and energy. Aquafit helped keep me healthier and decidedly thinner.

But life got in the way. I lost interest. And, you know, aquafit just moved to the backburner of “I’ll sign up next year.”

Several years and pounds later, I find myself back in aquafit. A new year’s resolution I opted to actually keep. But man oh man, what happened to make water churning so much harder? Linda and I were iron-women back in the day. Now, I’m feeling far more like rubber-woman. Sometimes even like sopping wet cardboard-woman. I swear they added molecules to the pool.

But I will say that several weeks in, I recognized some of the old iron-woman coming back to me. And by the end of June, I had more energy and fewer pounds. Don’t get me wrong. It will be a long time before I can jog in the pool like a whirlpool on steroids. If ever. But my confidence is up. And I’ve managed to keep a quasi-schedule over the summer with a less strenuous program in the cottage river. I’m looking forward to signing back up in September at the local pool.

And that, believe it or not, gives me hope on an unfinished manuscript that lingers in my computer. This 79,000+ word novel started out like most of my writing. I always write because I want to know the answers that I set up whenever I start a story or poem. And I set up a lot of thematic questions with this one: gender, politics, genetics and nature versus nurture. I was pumped to explore them and it was going great. 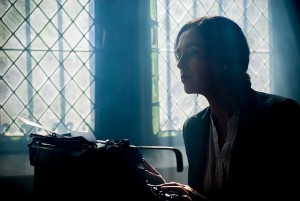 But sometimes —just like why I had to give up aquafit years ago—life gets in the way of writing. And sometimes, a writer can lose confidence. And then lose the connection to the heart of the story. And finally, simply lose interest. And that combination is deadly. My poor muse has been whispering in my ear for weeks and I just kept shrugging my shoulders and looking for distractions.

Man, I sure needed a kick in the pants. This post is my public announcement and thus, my self-kick in the pants. You, dear Top Drawer reader, will hold me accountable. Like my return to aquafit, I’m diving back into the pool of novel completion. 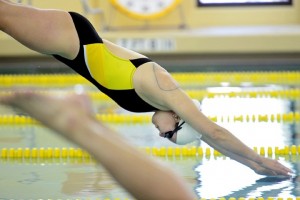 I’ve given myself a deadline. September 30: a complete manuscript ready for beta readers. Until then, I’ll be doing the backstroke, butterfly, crawl, freestyle…anything I can do on the keyboard to swim to the finish line. And the only record I’m looking for is to achieve completion on or before September 30.

I’ll let you know if I make it.